Let’s talk about drifting for a moment. It’s the slowest way around a corner, it’s an atrociously wasteful use of rear tires and petrol-heads go absolutely mental for it. Why? Because it looks incredible. The internet is obsessed with drifting;YouTube is filledwith overpowered sports cars sliding sideways trailing a glorious wall of tire smoke. Before I dive into the fun, tire smoking stuff, let me try to explain the basic concept of understeer versus oversteer.

If you’ve ever seen a car seemingly drive straight off of a racetrack, you’ve seen understeer. Essentially, understeer is when the front tires run out of grip. You turn the steering wheel, the front wheels turn, but the car continues to plow forward because the front tires don’t have the grip needed to turn the car.
Understeer happens for a number of reasons. The most common, is due to the way weight transfers under acceleration. When a car accelerates, weight shifts to the rear; think of the way you get pushed into your seat. When this happens, the increased weight in the rear pushes the rear tires into the pavement, and they gain grip. Like wise, weight comes off the front tires, and they lose grip. Therefore, accelerating mid corner will usually lead to understeer.
This is the textbook explanation for why understeer happens, but it will also occur anytime the front tires are overloaded. Tires have a limited amount of grip; once that limit is exceeded, they slide. Come into a corner with way too much speed and try to turn the car, and there’s a good chance that the front tires will just give up. 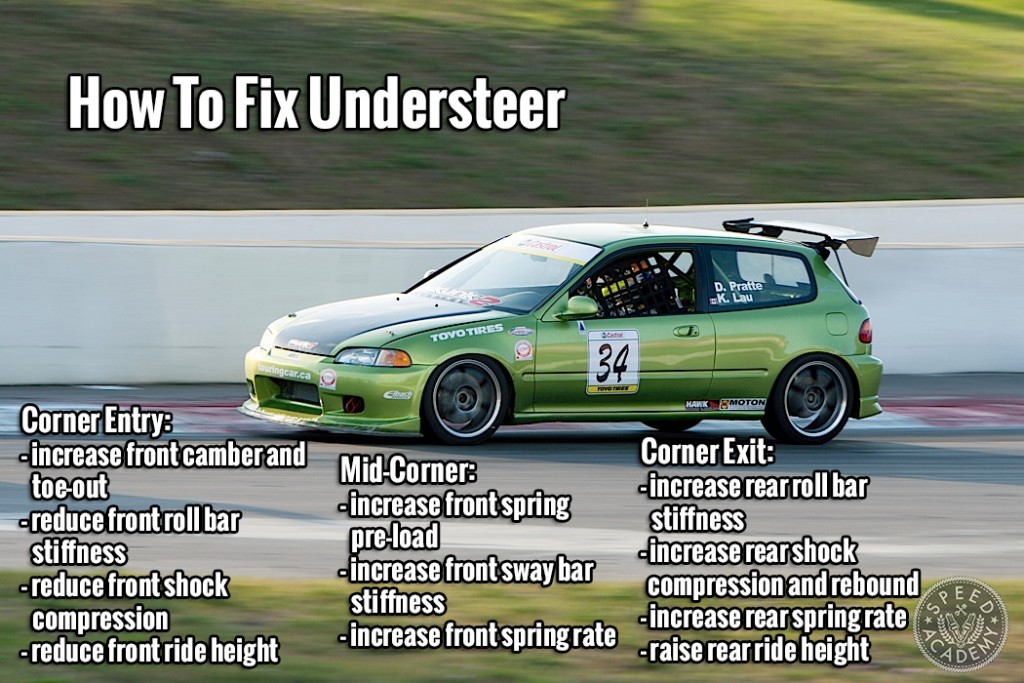 All those smokey drift videos we all clamour over? That’scontrolled oversteer. Simply put, oversteer is when the rear tires run out of grip before the front tires. Imagine for a moment, a car driving around a corner. The car has inertia; it naturally wants to continue going straight, but the front tires are forcing it to turn. This inertia causes what we call “centrifugal force”; the force that tries to pull the car out of the turn. 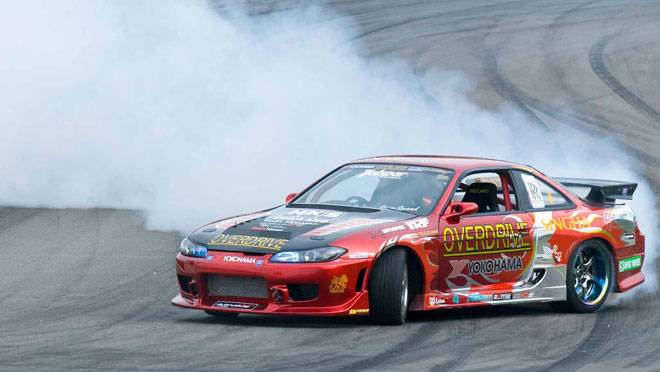 When the car oversteers, the front tires stay put, but the back tires are pulled out of the turn by centrifugal force. How do drifters maintain the slide? In rear-drive cars, this is simple: apply power to keep the rear tires spinning, and steer into the turn. Once the rear tires stop spinning, they’ll produce more grip, and will fall back into line with the front tires.
Why does oversteer happen? Remember how the rear of the car gains grip under acceleration, while the front of the car loses grip? Braking has the opposite effect. Under hard braking, weight shifts forward. This means the front of the car gains weight, and therefore grip, while the rear of the car gets lighter, losing grip. This can lead to oversteer on corner entry. Oversteer can also happen by simply sending too much power to the rear tires, easily done with any modern over-powered, rear-wheel drive sports car.

This is where oversteer gets dangerous; in order to successfully recover from a slide, the rear tires need to transition from spinning to gripping, smoothly. This is where the phrase “don’t lift off” comes from (ie: don’t lift off the throttle). If you enter a drift and immediately get off the gas, the rear wheels will transition from spinning to gripping, quickly. The rear will immediately stop sliding and gain grip very quickly. The rear of the car, which up to now has been gracefully sliding across the track, suddenly stops. Due to inertia, the car’s sliding rear end wants to continue sliding. (Newton’s 1st Law: an object in motion wants to continue in motion) This causes the weight of the car to shift to the outside of the turn causing dramatic body roll.

What happened here? I braked hard into turn two, causing weight to shift towards the front. This made the rear of the car light, so once I turned into the corner, my Civic’s rear tires ran out of grip before it’s front tires, and the car oversteered. Being a front wheel drive car, there was no way for the rear tires to transition from sliding to gripping smoothly. This caused the rear to suddenly stop sliding, and caused weight to shift towards the outside of the turn.This weight was then bounced back towards the inside of the turn, leading to snap oversteer.
Want to learn more about oversteer? Our friend and pro racing driver Randy Pobst from Motor Trend from can break it down for you better than anyone. Check out this video in all of its drifting glory below: