When the rumors first took place about a new Koenigsegg,everyone got hyped.When the rumors spread even fruther that it would be a 1000+hp hypercar with no gearbox,Koenigsegg fans went crazy.As you already know the no gearbox thing,picked everyone’s attention.The guys over at Top Gear immediately traveled to Angelhom,Sweeden and spent the day with Christian Von Koenigsegg himself,and his newest Alien creation.We say Alien tech because of the technology that it houses.We have never seen something like this.The Regera has a 5.0 liter V8 twin-turbo engine,and three electric motors that make 700hp together.The combined power of Regera is absolutely bomkers.It makes 1479 Hp and 1465 lb-ft of torque.The question is,how is all this power put to function with no gearbox?Here’s what the story says:
Koenigsegg Direct Drive (KDD). At its heart is a simple torque converter (“but that sounded like something from 1922, so we call it Hydra-Coup) that allows clutch slip.
So both electric and internal combustion powerplants are managed by one, slightly flexible gear pushing through a 2.73:1 final drive, with the whole lot, a combined 1479bhp and 1475lb ft, controlled by your right foot.
As you would probably guessed the Regera is very pleasant to drive and here’s what writer Ollie Marriage wrote:

As we pull out of the factory onto public roads it feels most like a lazy American V8 muscle car. The noise throbs and rises, but drive takes a second to catch up. That’s the torque converter doing its thing.
Then, at 30mph, if you’re only driving gently, the torque converter stops slipping, locks and gives you direct drive, the V8 churning away at barely tickover. It’s at that moment I start to love the Regera – the connection now feels natural and low rev thrust is unearthly as the electric motors add their bite. “See, like a Tesla, but half a tonne lighter and with another 1,000bhp!” Christian tells me.
[…] At the moment if you’re tickling along at 50mph with the clutch locked and put your foot down, the clutch opens, the revs rise faster than road speed and you have a slight CVT feel. The disconnect between noise and speed disguises the rate of progress – it feels like the clutch has slipped and you’re not accelerating that fast, but when you look down at the speedo you realise that all 1479bhp has found its way to the wheels…
We hope this clarifies a bit of the mystery behind the Regera. 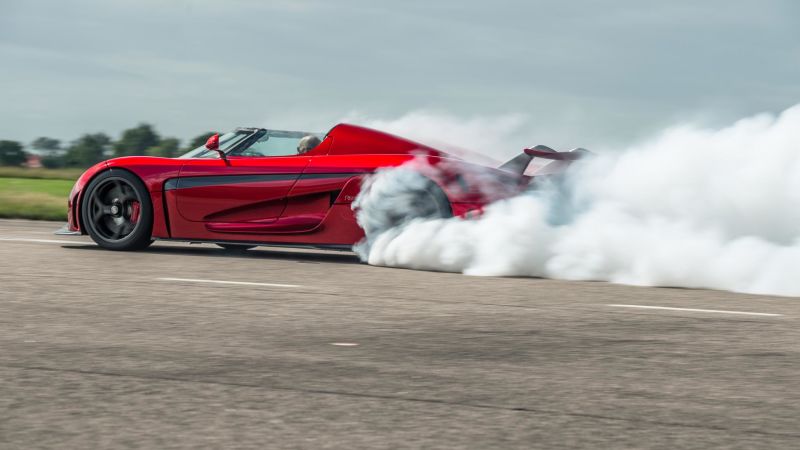