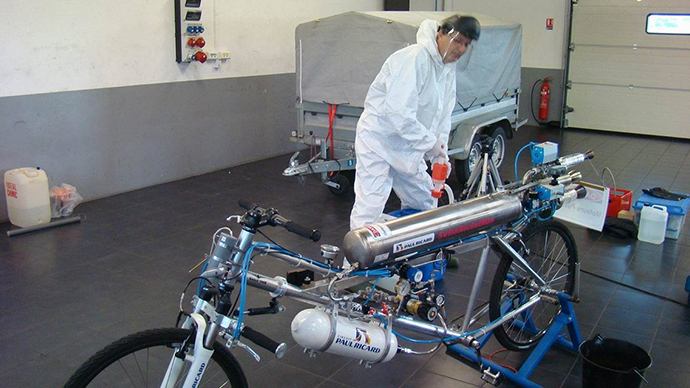 This may sound crazy but it’s real as is this bicycle built by François Gissy and the designer of the rocket motor Neracher Arnold. It’s time the introduce the new quarter mile record set by this insane bicycle: @333km/h for less than 7 seconds.

As we said a French Darevil has broken the world record ,covering a quarter mile in just 4.8 seconds from a standing start and crossed the finished line in under 7 seconds and beating a Ferrari F430 at a motor racing circuit in Le Catallet, France !On top of this bicycle you will see three rocket engines attached to its frame that work with highly concentrated 90% hydrogen peroxide.The frame of this bike was made in Spain,the brakes are ordinary rubber pads,the tires are specifically made for speed & tested by Michelin. Scroll down to check out the insane ride of this powerful bike!
Furthermore we suggest to watch the video, also feel free to share with us your opinion