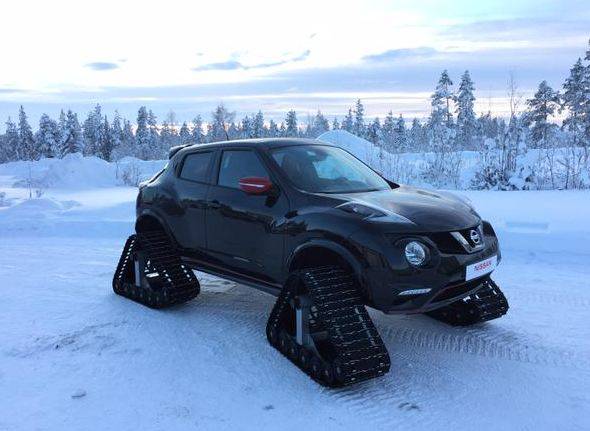 When Nissan posted it on Twitter, a lot of us thought that it was a nice photoshop work!
But in fact, it isn’t! It’s real! Nissan tells that their European colleagues actually built the damn thing using an AWD Xtronic CVT-equipped Juke as the base vehicle and they’re going to take it to northernmost reaches of Finland—ice- and snowbound Lapland—as a support vehicle for an ice-driving event.

It didn’t require a lot of modification. Before bolting on the tracks, the front and rear fascias were modified a bit, probably to prevent the tracks from tearing them right off. Nissan had to reprogram the torque vectoring AWD system slightly so it knew what was going on. They think it’ll top out at around 62 mph as it sits now. The conversion, will cost you $15,000 on top of the price of the Juke itself. So looks like the battle for this “weird” machines has just begun!