15 years ago, Turbocharging headline would have been taken as satire in bad taste. How could something that was only used for high performance vehicles and diesel trucks be efficient?

Well, Turbocharging has always been a way to improve the efficiency of an engine, and here we mean mechanical efficiency, not the “fuel efficiency” buzzword that creeps car brochures and TV adverts.

No, we are talking about efficiency in the sense of reusing otherwise wasted energy in the form of exhaust pressure and flow, whether for fuel economy or performance, a turbo helps reduce the wasted heat from each power stroke, and converts exhaust gas into usable “boost” meaning highly compressed, high pressure air, that in a nutshell artificially increases engine displacement.

However, the one drawback that always seemed to haunt these turbocharged machines was known as Lag, put simply, it is the delay in throttle response due to the Turbocharger not spooling up (rotating) at low engine RPM. This is due to the lesser flow volume and slower flow speed of exhaust gasses. 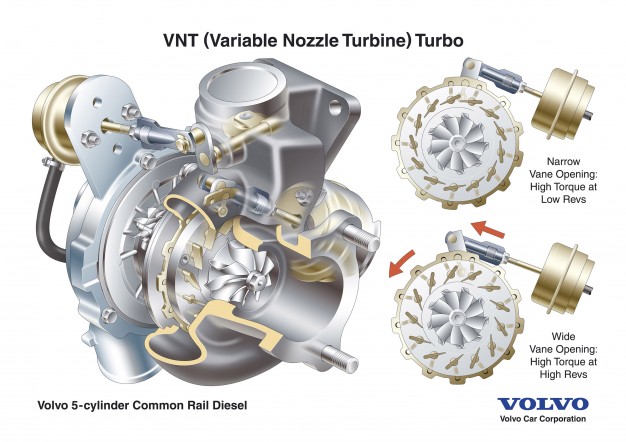 During the past 25 years, many methods of compensating for this Lag have been invented, such as the “misfiring system” antilag, twin turbochargers of smaller dimensions, two step sequential systems, and other creative ways of dealing with this predicament.
But, as you may have noticed, all of those solutions are oriented towards performance, from rallying legends to Japanese turbocharged icons.

Where does this leave the promise of increased fuel economy?
Well, in more recent developments, combining high revving electric motors with turbochargers has led to virtually lag-less increase in power, with smaller engines.

Other not so experimental approaches include what’s called “variable geometry” turbos on Turbocharging technology, which artificially vary the speed of exhaust flow, allowing for compensation when exhaust gas flow is insufficient, by “decreasing” the size of the turbine housing.

Twin scroll, variable pitch vanes, electrically assisted, all of these wonderful technological developments will trickle down to the daily drivers of tomorrow, allowing for better fuel economy without resorting to reducing engine power output.

It seems technology finds a way to have cake and eat it too, HP’s and MPG’s one will not compromise the other anymore.