Honda filed this patent to Japan in late May.According to the patent,the triple clutch transmission will offer both efficiency and transient response benefits,compared to the dual clutch.Also compared to the dual clutch trans,the new one indicates that there will be no torque omission.Torque omission refers to a drop in torque to the wheels,during a gear change.Further explained:

The above-mentioned conventional gearbox which is a kind of the gearbox of a dual clutch type is holding and changing two friction clutches, where PURISHIFUTO [ the following gear ratio ] preliminarily, when changing gears sequentially, and gear change without a torque omission is attained.
This passage mentions the lack of “torque removal,” as well as an improvement in response time:
Since the number of friction engaging devices C1 to C3 has been increased from two to three,in respect to the usual dual clutch type speed change gear,a probability that the friction engagement device to be engaged at the present speed change stage,and a friction engagement device to be engaged at a target speed change stage,are coincided to each other is decreased and a probability that no torque removal occurs,and a clutch-to-clutch speed change can be carried out is increased to enable a multistep formation at the time of step speed change to be more effectively restricted and a speed change response to be increased. 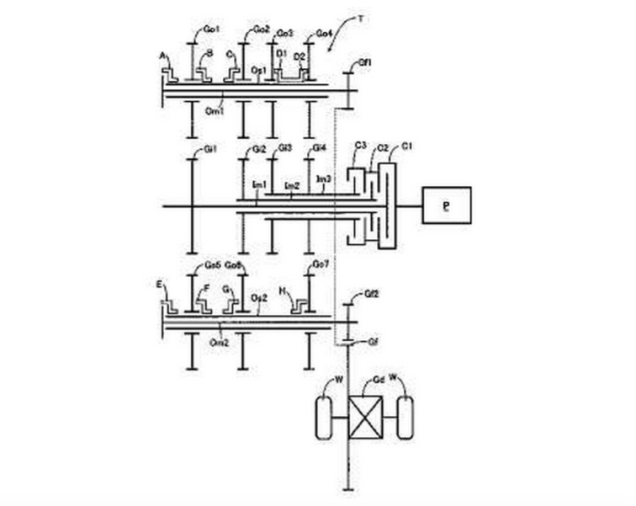 We are not sure how Honda triple clutch exactly works,but the patent application has a few diagrams so if you’re an engineer,by all means take a look at them,and you are more than welcomed to leave your thoughts and comments.We have no idea if this will make its way to passengers cars,but the patent says that it will have better response time and less power loss,so that’s pretty cool.