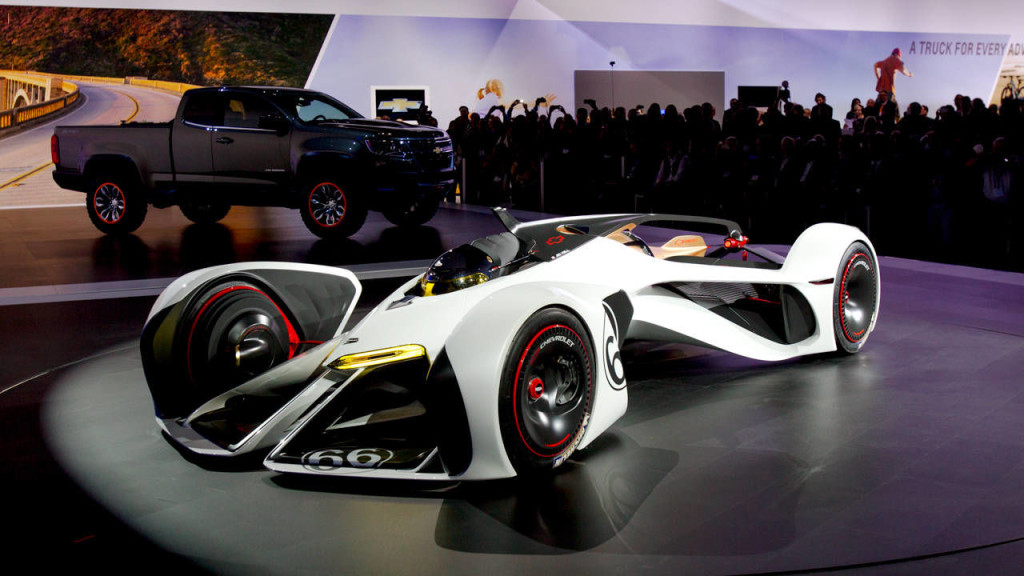 “Propabily your not a big internet fan or a petrol head if you’ve never seen this kind of “weird” vehicle.
It’s time for the designers to explain their creature.
Frank Saucedo sits down with a borrowed pen and a hungry looking piece of torn out notebook paper. “You’re trying to prove I can’t draw anymore!” He laughs. Frank’s the head of GM’s Advanced Design Studio in California. Behind him is the wildest concept at the Los Angeles Auto Show—the Chevrolet Chaparral 2X Vision Gran Turismo— still hidden under a blue sheet. It’s maybe knee high, designed in consultation with racing legend Jim Hall, and the latest project to come out of his North Hollywood shop. Trying to prove that Frank couldn’t draw anymore would have never occurred to me.
He tucks into the lined paper, explaining his way through the nearly
sci-fi, certainly NASA-grade concept. I love this stuff. Friends, mostly engineers, wrinkle their noses at show cars that don’t have a chance in hell at production. Not me. Nothing suckers me like the grandiose.
Designing a concept to exist purely inside the virtual environment of
Gran Turismo means imaginative and novel ideas won’t get left on the table, and ensuring it lives up to the legacy of Jim Hall and Chaparral makes it more special then some of the other imaginary race cars in the Vision Gran Turismo program.
It’s laser-powered, Frank tells me.
The laser fires at a cone, and creates such focused energy around the cone that a plasma wave exists, then ceases to exist, and along with it a shockwave strong enough for propulsion. This is proven technology, it’s being explored as a way to fire satellites into orbit. Jim Hall something. Squirrel-suit something. Frank is excited. He looks up at me and says, “We need Charles.”
It’s the head of Charles Lefranc that the 2X sprang from, and despite his interrupted lunch he’s surprisingly cheery when he joins us to sketch his ideas out over a clean sheet of paper. 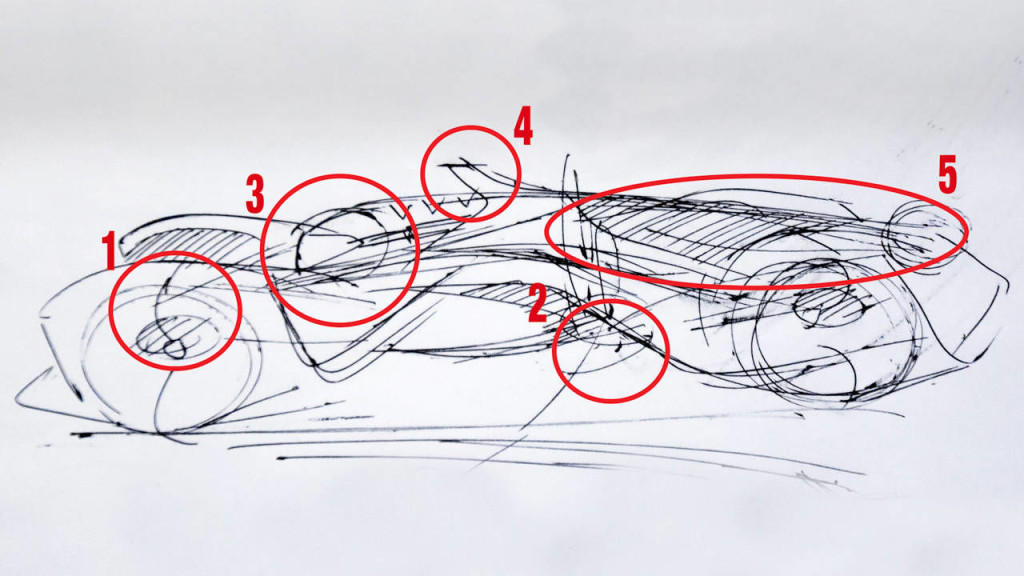 1) Saucedo: The car is this big “X”, as you see, and you’re in there, laying down in this prone position. Charles was inspired by the flying squirrel suit. The idea was MotoGP meets flying suit, so you’re using body english like you’d use on a motorcycle, in addition to hand and foot controls.
Lefranc:They are sometimes almost touching the ground, it feels totally insane to me, and for race cars, it was time to evolve that direction. You’re connected to the four tires, constantly you have a sense of movement, he says, moving his raised arms against invisible forces in the air. 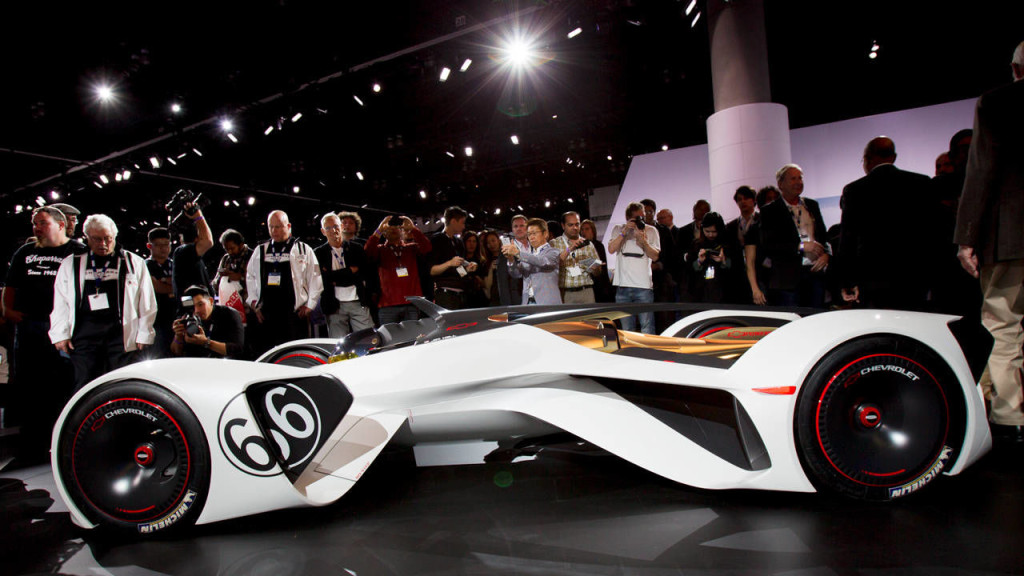 2) Saucedo: Jim Hall was in the studio and early on he wanted to know about the aerodynamics. The entire body is basically a wing shape, which helps. Besides that, these thrust vectoring elements can be pointed up to give you downforce in the corners, not unlike the adjustable wing on the Chaparral 2E.
Lefranc: If you need more downforce the panel can be tilted up and then the thrust, instead of going directly backwards, can be aimed upwards a little. 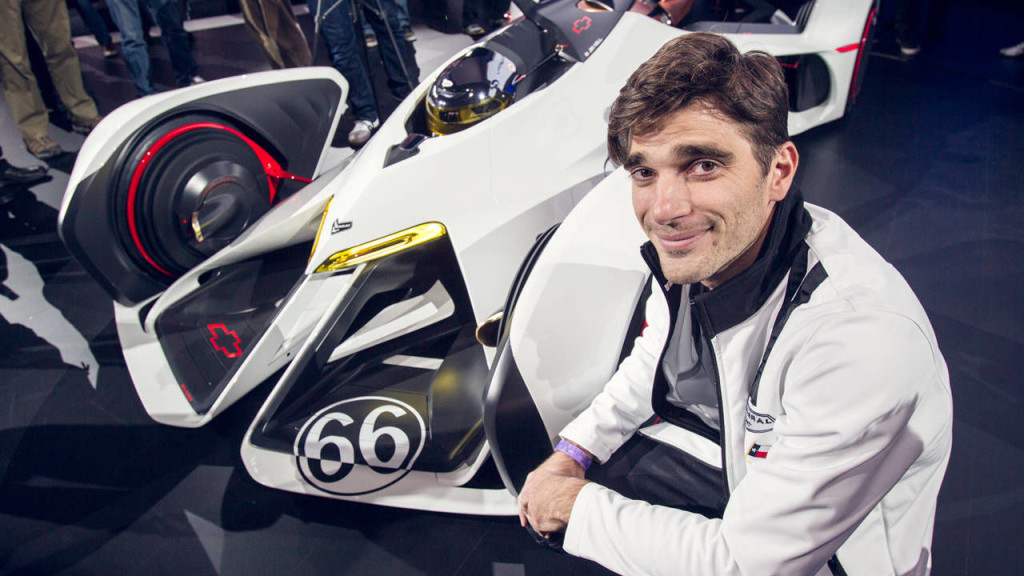 3) Lefranc: Head first means you have to lay down, it takes a lot more space and you have to position your hands and legs in such a way that you keep the footprint short.
Mixed with the inspiration from the flying suit, I thought we could make the legs responsible for the control of the rear wheels and the arms responsible for controlling the front.
Saucedo: Kazunori (Yamauchi, producer of the Gran Turismo series) said they’ve got to work on the physics of this car, it’s so different from anything they’ve done. Everything from the weight on each wheel to the lack of suspension is accounted for. The premise is that you could do a tunable carbon structure, so the body can be the suspension. You’ll see in the game footage that there’s a shot going down the Mulsanne Straight and the body moves a little bit but the wheels are moving a lot. We were building this for a game, but we wanted to use known technologies. And, you know, we have carbon leaf springs on the Corvette.

Jim came to the studio and said “I want to make sure we’re getting enough downforce out of this, and I want to make sure it’s fast enough.”
We said in the game it’s got a 671-kilowatt laser, about 900
horsepower, and he said: “Mmm. That’ll do it. But we’ve got to be
fastest.”
When we had an event with Kazunori, he said there’s only one problem: It’s too fast.

“It grows around you… that helmet is really cool….” Saucedo prods Lefranc.
“It’s like in F1, the driver needs to support so many G’s.” Lefranc
continues. “We thought, why not create a support structure? The helmet encloses you, like a canopy. Those trusses at the back are rubber. When you’re in a corner and you can’t support your head these trusses are here to make sure you can handle the G’s. In the game you can see the driver’s head moving around just a little here.” 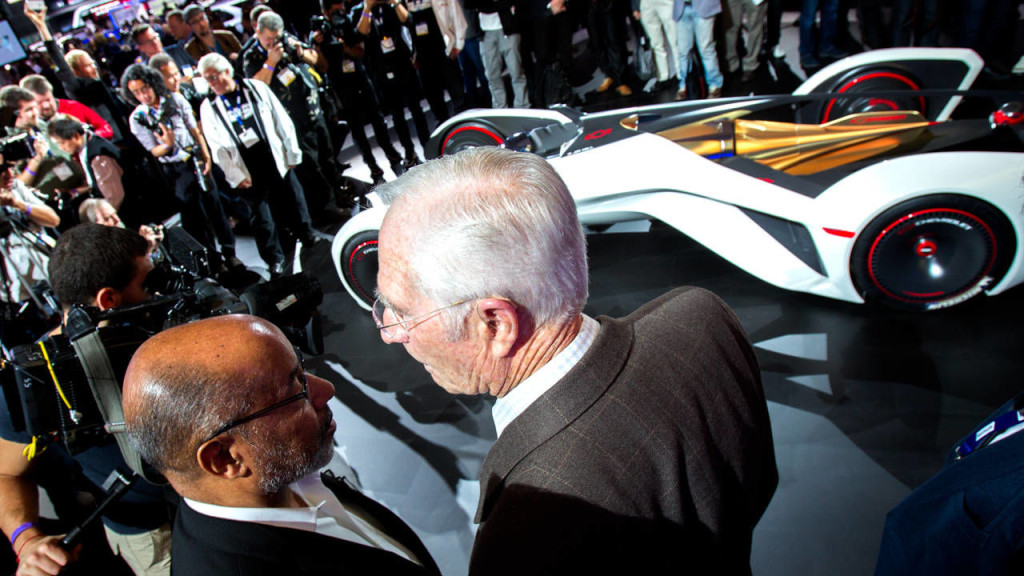 4) Lefranc: With the camera that sits on top of the fin, the driver will have maximum visibility. This will allow him to see through the car, and the car in front of him. 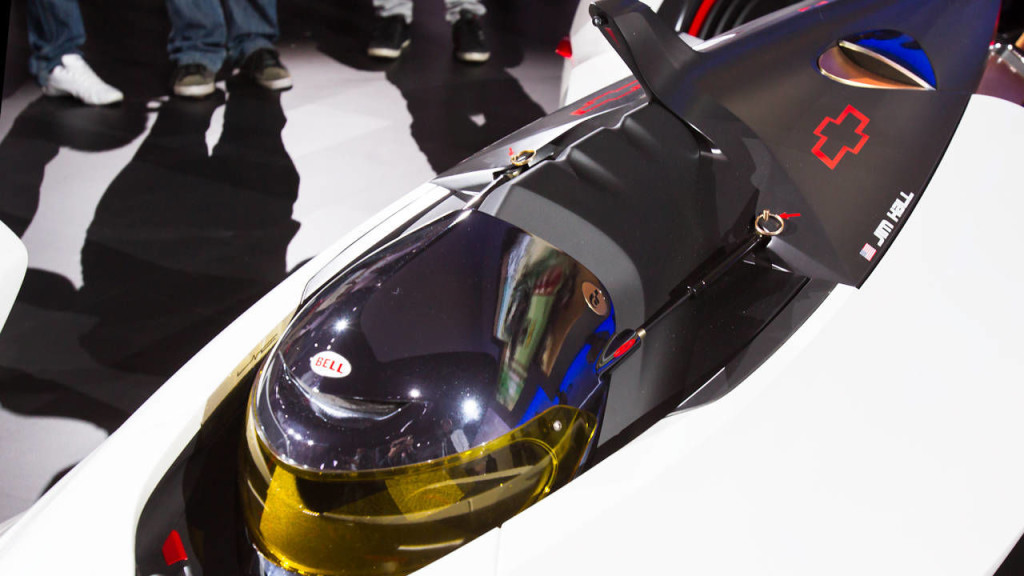 5) Lefranc: It was a stretch to package the lightcraft technology on the car. After you link all these elements on the car, the design is driven by the package. The laser positioning was tricky. The laser has to sit at the back of the car in order to point into that cone and create the shockwave. These elements act like a bridge, and inside them we englobe the laser. I didn’t want something too dominant. It (the laser) points at that cone just behind the driver, it has the look of a wasp’s stinger. That’s kind of the heartbeat of the car, where the thrust is created, and above that, connecting the two is this fin to complete the silhouette of the car. 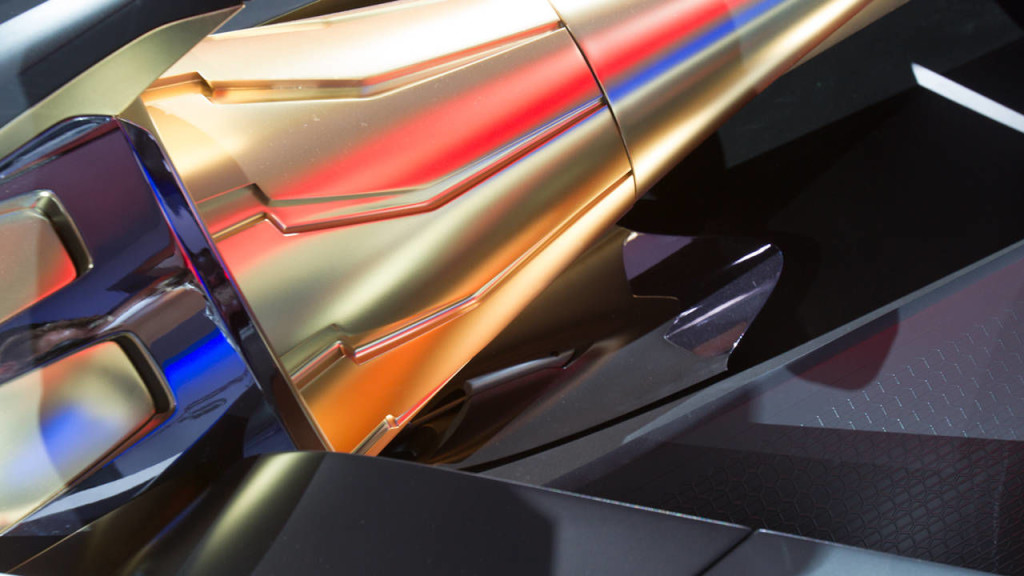