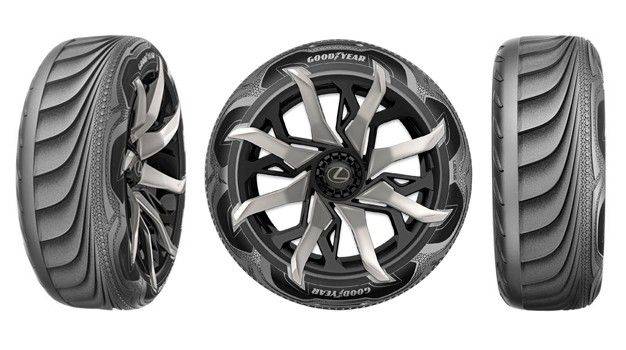 There was a time when concept cars exhibited such radical pie-in-the-sky thinking that you wondered whether the designers used LSD or had their six-year-olds draw the first sketches. With automakers now rigidly focused on making money, it seems the tire manufacturers are the primary generators of mind-melting creativity these days. That’s certainly the case at the 2015 Geneva auto show, where Goodyear introduced its electricity-producing BHO3 and shape-shifting Triple Tube concept tires. Naturally, they’re wrapped in tread patterns that would look crazy even on the bottom of a running shoe. 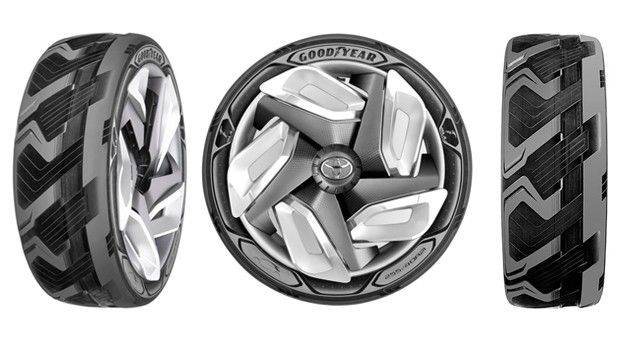 The BHO3 (above) uses thermoelectric and piezoelectric materials embedded in the tread to convert the energy from heat and deformation into electricity as the tire rolls down the road. Goodyear gives no indication as to exactly how much electricity the BHO3 could generate, but it does make the rather bold claim that “this visionary tire technology could eliminate the vehicle-range anxiety motorists may have with electric cars.” Of course, neither Goodyear nor common sense suggest such a tire will be in production any time soon. We are, however, expecting electricity-producing shock absorbers to become a reality within a few years.While the name BHO3 has us scratching our heads, the Triple Tube (above) leaves nothing to the imagination. Three tubes located just below the tread allow fine adjustments in the pressure along the inner and outer shoulders and the center of the tire. An internal pump transfers air between the main chamber and the three tubes to vary the tire’s contact patch on the fly. Goodyear imagines three different modes that adapt to the driving conditions. The eco/safety position uses maximum pressure in all three tubes for reduced rolling resistance. Setting the center tube to a higher pressure than the shoulders resists hydroplaning in wet conditions. The sporty mode increases the size of the contact patch by reducing the pressure of the inboard tube.

via Car and Driver