Home
EngineeringEngine of the week

This week on GT Speed, we feature the Willys Go Devil engine.

“War doesn’t determine who is right, only who is left.”

War times are unfortunate, and have plagued human history since the very beginning, but where there is conflict, technological progress and outstanding engineering are to be found.

Such is the case of the Willys Go Devil, which is actually named L134, but the casual moniker became the most know way to call this engine.

The Wyllis Go Devil is an inline 4 cylinder engine developed for use in the Willys MB Jeep during World War II. It was fitted to almost all Jeep vehicles built for the USA, after the war, it powered various civilian Jeeps.

Developed by Delmar “Barney” Roos, Chief Engineer at Willys, this engine displaced 134.2 cubic inches, or 2.2 liters, with a 3.125 in (79.4 mm) bore and 4.375 in (111.1 mm) stroke, the undersquare setup enhanced torque while keeping dimensions small enough to fit the engine in a variety of engine bays.

While most of the time the engineers seek to develop an economic, efficient, or simply high performing engine, the main focus for the Go Devil can be summed up in one word: reliability.

Many things comprise the formula for reliability, from having a structurally sound block and heads, to simplifying systems to reduce the number of moving parts. Opting for an L head design seems like an odd course of action, but when you consider the compact nature of a L type head, the use of such configuration starts to make sense. 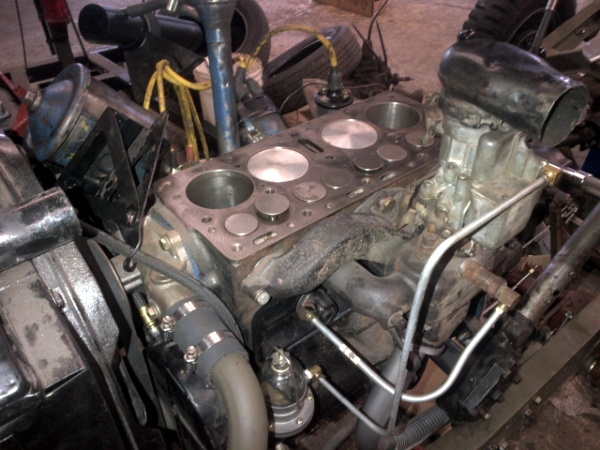 Here we see the location of the valves, with the cylinderhead removed.

An L type head has the valves parallel to the cylinders, and that makes for a vary compact and easy to manufacture.

For today’s standards, the Willys Go Devil might seem a tad underpowered, churning out just 60 horsepower at 4000 rpm, but the important number we should look at is the torque figure, which is 105 lb-ft produced at 2000 rpm. With a relatively low compression ratio of 6.48:1 we can infer this Go Devil engine was design to be as reliable and torquey as possible, two qualities that are considered necessary for both off road and military vehicles in general.

By the 1950’s the L134 had been replaced by the Willys Hurricane engine, which was more advanced an powerful.

Some engines are designed to win races. Others, to set records, the Willys Go Devil was designed to power an army in the time of need, and for that, we chose to feature it as our Engine Of The Week.